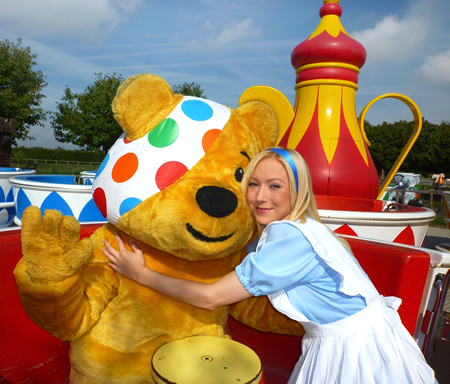 An advertisement campaign by CuCo Creative for one of Dorset’s top family attractions reaped its rewards with a bumper turnout for the BBC’s 2010 Children in Need extravaganza.

That event drew crowds of 1,500-plus – and the momentum continued right through to Friday 19 November, when the colourful fun park near Bournemouth International Airport hosted BBC South’s live Children in Need show.

“The night was a huge success, raising more than £12,700, and we’re thrilled that our advertising hit the spot and helped to bring people flocking in such numbers,” said CuCo’s creative director Christian Cutler.

“We’ve been producing successful branding and advertising campaigns for Adventure Wonderland since 2008, but to be involved with such a great charity makes this one even more special.

“It’s also given us a real buzz to see our work flashed on tens of thousands of TV screens across the South.”

Adventure Wonderland’s big night helped swell Friday’s CIN total to more than £18m – a figure that is set to more than double before the appeal is formally closed.

Buoyed by its latest success, Adventure Wonderland will enter 2011 with a new-look logo – also designed by CuCo.

Christian Cutler is the Creative Director and Co-Founder of the award-winning creative marketing agency CuCo Creative. With over 20 years of experience in the design industry, Christian has delivered countless successful brand launches and re-brand projects. Christian has also overseen numerous successful packaging design projects. He is the design lead on all packaging design briefs, including developing and producing the physical end result. He recognises effectiveness is key for all clients, and this shines through whenever developing marketing strategies and creative online and offline advertising campaigns. CuCo's clients enjoy fantastic ROI on the strength of his strategic ideas. Typography is Christian's guilty pleasure. He's a perfectionist in his work, living by the motto, 'That will do will never do.'

Other posts by Christian Cutler

The Further Adventures of CuCo Creative

CuCo back on the Adventure trail

This website ONLY uses Matomo Analytics to collect anonymous information such as the number of visitors to the site, and the most popular pages visited. This information is only accessed by CuCo - non of this data is shared with Google – CuCo is 100% in control of this data/privacy.