Charter 2010 was a non-partisan pressure group formed in the run-up to the Westminster General Election in May 2010. Shrewdly recognising the prospect of the election producing a “hung” parliament in which no single party held a clear majority, the organisation dedicated itself to campaigning for any such parliament to be transformed into a stable and representative government which could focus on dealing with the economic crisis, public services and the environment, undistracted by the short-term political and electoral pressures of an impending second election.

CuCo Creative Ltd was approached by Charter 2010 at the end of November 2009. Charter 2010 wanted a fully interactive website developed that would become the “soapbox” for this cause, engaging political and media interest. This presented considerable challenges, bearing in mind that in autumn 2009 most opinion polls were pointing to a substantial overall majority for the Conservatives; indeed most of the Tory faithful were reluctant even to entertain the possibility of winning insufficient seats to form a stable one-party government. 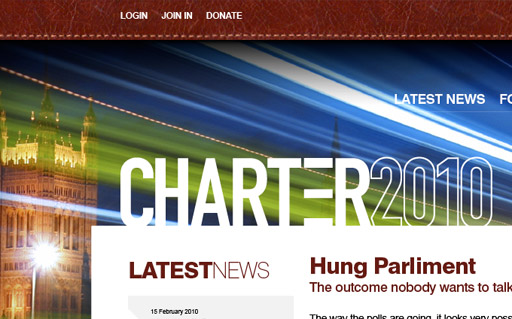 Charter 2010’s contract with CuCo Creative was confirmed on 14 December 2009, giving CuCo Creative one month to brand the campaign and to design, build and test the website before the required live launch in mid-January. This time-critical lead-in period was reduced in effect to three weeks by the Christmas and New Year holiday period.

Key requirements of the campaign in general and website in particular included:

Phase one (b) – key appointments

CuCo Creative identified and resourced a staff of four to create, administer, drive and promote the website. These were:

(1) A team leader who was the main graphic designer and Charter 2010’s principal contact. This person: 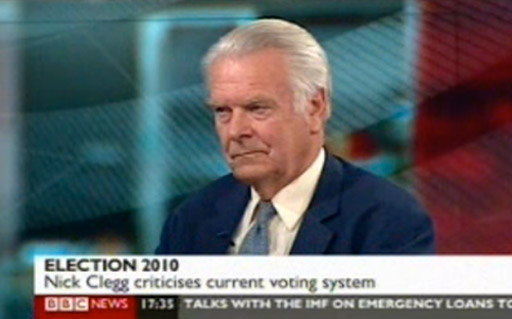 The success or otherwise of Charter 2010’s campaign depended greatly on Charter 2010’s ability to create, maintain and promote the website as both relevant and critical to the wider political agenda. From a starting point where the very thought of a hung parliament was dismissed as fanciful by less enlightened commentators – and was anathema to some – it was essential to establish a “base camp” of credibility.

Pivotal to this was the website’s ability to maintain a clearly defined news agenda and to secure airtime and/or column inches for high-profile protagonists such Robert Skidelsky and Lords Owen and Desai. Coverage was gained through:

In addition, tacit recognition of the website’s influence was evident in the wholesale, unattributed repetition of themes and phrases in the press and on the broadcast media; imitation was indeed the sincerest form of flattery.

Given that the epicentre of Charter 2010’s target audience was relatively small – say, 1000 or so MPs and candidates with a real chance of winning their seat, 100 members of the House of Lords, 50 journalists, 20 academics and civil servants and 100 key party figures and ‘apparatchiks’  – the website’s success was beyond dispute: By election day (6 May 2010) the site had logged:

Most popular pages were (in descending order):

The relevance, significance and prescience of the Charter 2010 campaign was underscored as the General Election failed to deliver a decisive mandate to any one party. The website maintained hour-by-hour updates in the political vacuum that followed, tracking the two main parties’ respective overtures to the Liberal Democrats and the intense period of negotiation that led in turn to the formation of the historic Conservative/Lib Dem coalition.

Following consultations with the client, CuCo Creative’s team leader ensured that an electronic copy of the definitive Charter 2010 Guide to a Hung Parliament was mailed to every successful candidate on the day after the election, summarising the conventions, precedents, practicalities and possibilities flowing from the electoral impasse.

With the formation and first actions of the new coalition continuing to dominate the news agenda, the website kept a keen daily watching brief, with informed analysis of the new political landscape and a sharper focus on specific issues such as public spending cuts. Also highlighted were wider constitutional issues such as the proposed referendum on electoral reform.

The website was formally closed on 30 June 2010 following the coalition’s unofficial “bedding in” period.  “Tempting though it is to continue, we have concluded that the task for which the website was intended – making sure the politicians and the civil servants planned for a hung parliament, and helping them to so do – has been completed,” said site moderator Mike Thomas.

However, while no longer updated, the site remained on the internet so the material in it remained easily accessible for reference purposes. It has since been archived along with assorted relevant correspondence and documentation so that academics and others can study its development in the future. 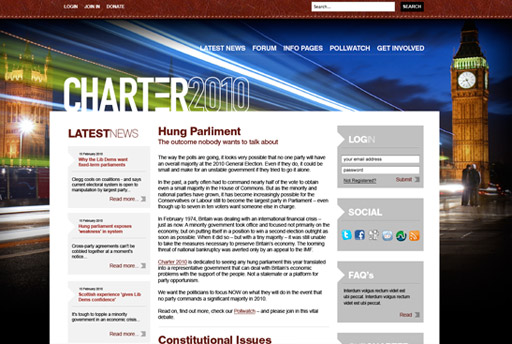 From the day we launched, to the formation of the coalition government, was the most tremendous rollercoaster of a ride. The team at CuCo Creative provided exemplary technical and journalistic support, getting the site up and running within a month of being given the OK, then providing continued help and speedy response to site development over the six months the site existed – giving us the complete design and marketing solution we needed.

“With the collective wisdom of everyone who contributed, we ‘called it right’ and had a significant influence on the thinking and actions of those at the centre of events: from the Cabinet Office and leading figures in Parliament to the national and international media, who often picked up on our ideas – even using the unique and innovative Hung Parliament Index graphics developed for us by CuCo.

“One of the most significant factors among voters was their growing acceptance of – and even enthusiasm for – a situation where no one party had overall control. It may have been enormously influential in the election result and events thereafter.”
Mike Thomas (site moderator, charter2010.co.uk)