Pantone Colour Institute, the world-renowned authority on colour, had a big announcement to make this April – For the first time ever, they will be adding an official character-branded pantone to their recognised colour range.

The new groundbreaking colour will be based on…wait for it… The Minions!!, the stars of Universal Pictures and Illumination Entertainment’s Despicable Me franchise.

The Minions first burst onto the scene in 2010, stealing the worlds hearts and causing what we like to call, ‘global minion fever’. Since then they’ve been pretty busy, establishing themselves as a cult favourite and appearing everywhere from arcade games, to duck tape, to Haribo (and every weird and wonderful thing in between!) Now their world domination is going one step further – they are being immortalised in the world-renowned Pantone Colour Institute palette.

This incredible collaboration was first conceived by none other than Pharrell Williams, who helped develop the music for the Despicable Me franchise. Whilst visiting the Pantone Colour Institute, he noted the current consumer desire to add more energizing colour into their lives. With this realization, the idea was sparked, and Pantone got to work collaborating with the animation team at Illumination Entertainment to develop the most pure representation of this iconic yellow, and the sweet and subversive energy of the Minions.

The new colour, the first in 3 years, is described by Pantone as “an extroverted hue, it projects playfulness and warmth and is suggestive of intellectual curiosity and enlightenment.” This Minion Yellow certainly fills the need for more uplifting and vibrant colours, and we think that the character association perfectly captures this! 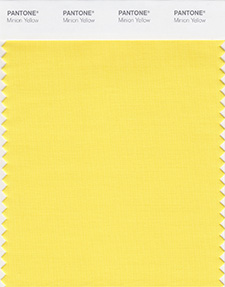 “Colour is contextual and right now there is a desire for colours that are more vibrant and uplifting. This is especially the case with the yellows, so given the worldwide popularity of the Minions, it seemed only natural to name a colour after a character for the first time in our history. When developing the colour, we worked directly with the animation team at Illumination, and we thoughtfully considered the characters’ aura to ensure PANTONE Minion Yellow is the exact right hue.” Laurie Pressman, Vice President, Pantone Colour Institute

“Pantone has long established its reputation as the global colour authority. We are thrilled that their colour experts saw market demand for yellow and looked to the Minions, as global pop culture icons, to add into its yellow spectrum.” Jamie Stevens, Executive Vice President, Global Retail Development, Universal Partnerships & Licensing.

We for one are extremely excited to get our mitts on the new colour, which will be added to the PANTONE Fashion, Home + Interiors range, but what do you think?

Are you a fan of Minion Yellow? It won’t be available until the next colour launch, so while you wait, why not check out The Minions in all their glory below!